Excitement has been building in Telluride as director Quentin Tarantino began filming his newest endeavor, “The Hateful Eight”, in December. The 8th feature film by Tarantino follows the story of several bounty hunters who are trying to survive during a terrible blizzard in 1870’s post Civil War Wyoming. The cast of “The Hateful Eight” includes Tarantino go to favorites Samuel Jackson (“Pulp Fiction”) Michael Madsen (Reservoir Dogs) as well as Kurt Russell, Channing Tatum, Tim Roth and Jennifer Jason Leigh.

Tarantino chose Telluride after falling in love with the Schmid Ranch, located 10 miles west of Telluride on the Wilson Mesa. In addition, the constant snowy landscape provided by Telluride was precisely what Tarantino was looking for when scouting out locations for his film. The entirety of the movie will be shot in Telluride, including both interiors and exteriors, and is anticipated to take 49 days to film.

Another enticement that no doubt lured the director to come to Colorado was the 5 million dollar incentive package along with the 20% cash rebate program. “The Hateful Eight” is projected to have a 44 million dollar budget, and 15.7 million of that is designated for Colorado. In addition, 9.35 million dollars is estimated to be spent on other expenses in Telluride, such as lodging and food, which will definitely provide a huge boost to the Telluride economy. Additionally, the production is expected to hire 168 Colorado crew members, and our Colorado crew members are armed and ready for the task. Samuel Jackson summed it up with a tweet on December 10th “And it begins.” 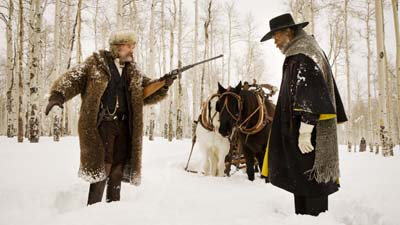