If you are Casting, Producing, Directing, Writing and/or Representing talent, you will want to meet these talented actor/writers.

Beverages and light snacks will be provided.

Representatives from Atlanta, Albuquerque & Denver will be in attendance.

This is a free event, please RSVP – pnr1@mac.com

The Mile High Horror Film Festival returns to the Alamo Drafthouse Cinema in Littleton, CO May 7-10, 2020 with single screenings and events planned throughout 2019. The MHHFF showcases the very best genre films from around the world. In its previous festival, it showcased over 90 films from several different countries. Previous guests have included Jack Black, Dylan Minnette, Tobin Bell, and many others. The MHHFF is recognized as one of the “top 5 coolest horror/sci-fi film festivals” by MovieMaker Magazine. WWW.MHHFF.COM.

FILMWORKER is a new documentary that tells the story of Leon Vitali and his role as Stanley Kubrick’s right-hand man during all of Kubrick’s productions in the final part of his career and leading up to his death in 1999.

It’s a rare person who would give up fame and fortune to toil in obscurity for someone else’s creative vision. Yet, that’s exactly what Leon Vitali did after his acclaimed performance as Lord Bullingdon in Stanley Kubrick’s Barry Lyndon. The young actor surrendered his thriving career to become Kubrick’s loyal right-hand man. For more than two decades, Leon played a crucial role behind-the-scenes helping Kubrick make and maintain his legendary body of work. The complex, interdependent relationship between Leon and Kubrick was founded on devotion, sacrifice and the grueling, joyful reality of the creative process. By entering their unique world we come to understand how the mundane gives rise to the magnificent as timeless cinema is brought to life at its most practical and profound level.

“Filmworker” amounts to yet another rite of devotion in the ongoing cult of Kubrick-a cult that worked its power not just on Vitali but on all of modern cinema.”

“The portrait [Vitali] creates of his former boss reveals a man of great curiosity, generosity and creativity, but also a frequently imperious and unreasonably demanding perfectionist.”

“Stanley Kubrick may have been a cinematic genius, but he was only able to accomplish his later masterworks thanks to the devoted assistance of his right-hand man Leon Vitali, who receives his due in this sterling documentary—one of the year’s best.”

“But “Filmworker” isn’t simply about Kubrick, or Vitali. In a sense, it’s the ultimate fan story: a tale of what it means to live vicariously through a genius.”

The film plays at the Landmark Chez Artiste in Denver, CO from June 8th through the 14th, 2018. 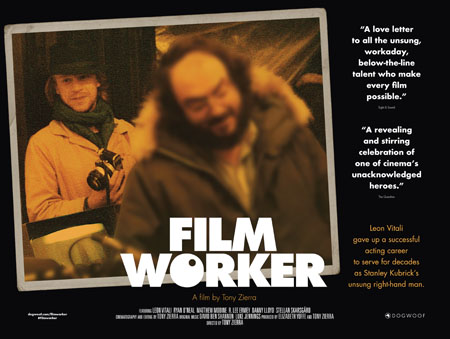 Please join Peak Media, Inc. and ACamera Rentals on Thursday February 16th as we show off the new C700 camera from Canon. ProMax will be attending as well to show you how to use their shared storage and media asset solution to affordably manage 4K files. RSVP’s required: sales@peakmediainc.com. 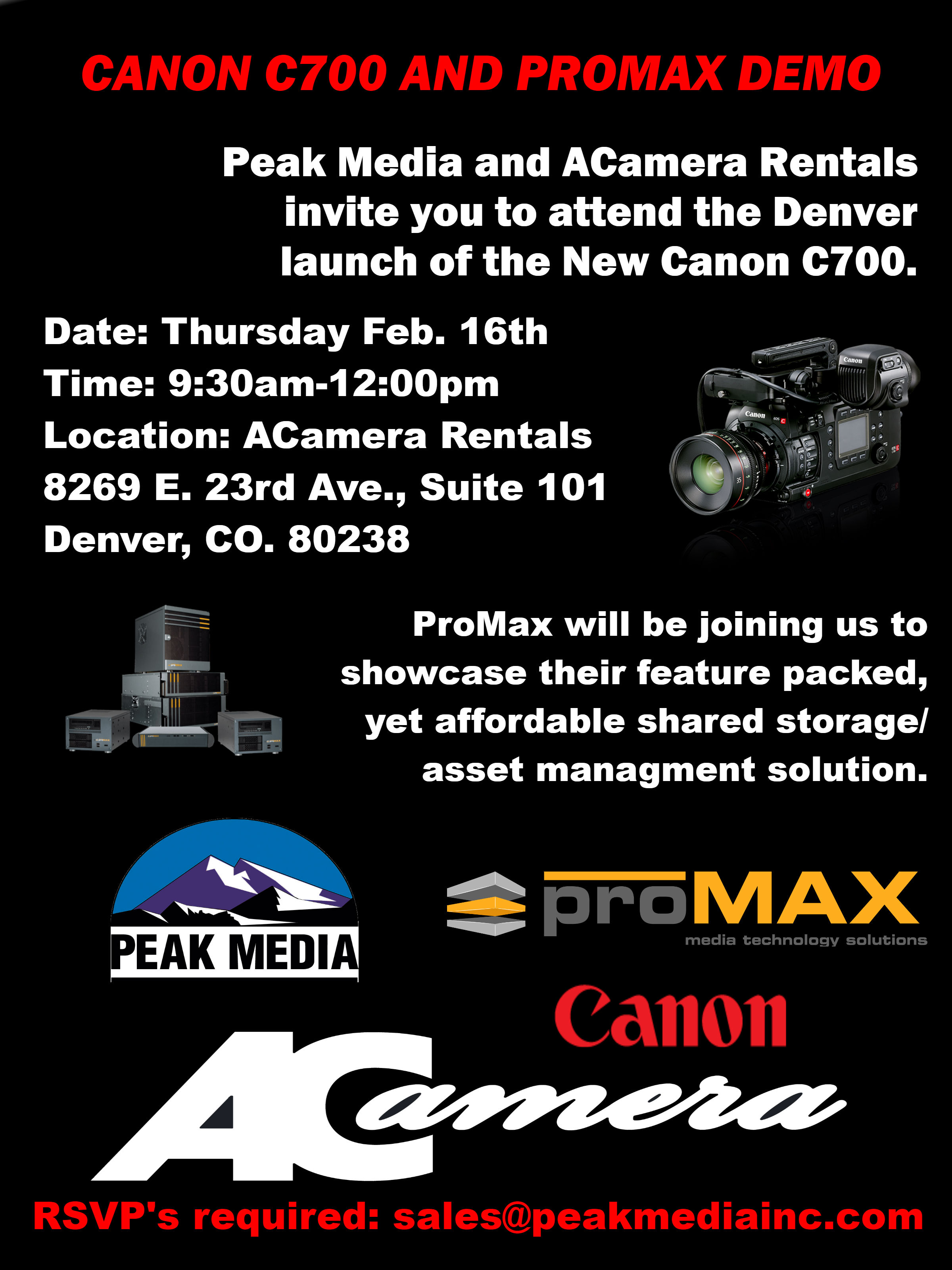 Join us for the latest Indie Lens Pop-Up documentary series event with MEET THE PA at Tim Gill Center for Public Media. Brought to you by Rocky Mountain PBS and Independent Film Society of Colorado.

Join us for a short discussion afterward.

Directed by siblings Ravi Patel and Geeta Patel, this award-winning film comes to you from Producer Janet Eckholm (AMERICAN SPLENDOR) and Academy Award Winning Executive Producer Geralyn Dreyfous (BORN INTO BROTHELS/THE SQUARE) and PBS. Meet the Patels is about Ravi Patel, an almost-30-year-old Indian-American actor who enters a love triangle between the woman of his dreams and his parents. Meet the Patels uses humor to address a timely social issue: In early 2009, directors, sister and brother team, Geeta and Ravi Patel began to explore and document the societal pressures of marriage in their first-generation Indian-American family. Through research in India and America, they discovered that their “Indian Issue” was more of an “American Issue”: the majority of Americans with strong cultural and religious roots shared a serious psychological conflict when it came to dating (and marrying) outside of their skin color, culture, religion, and ethnicity. 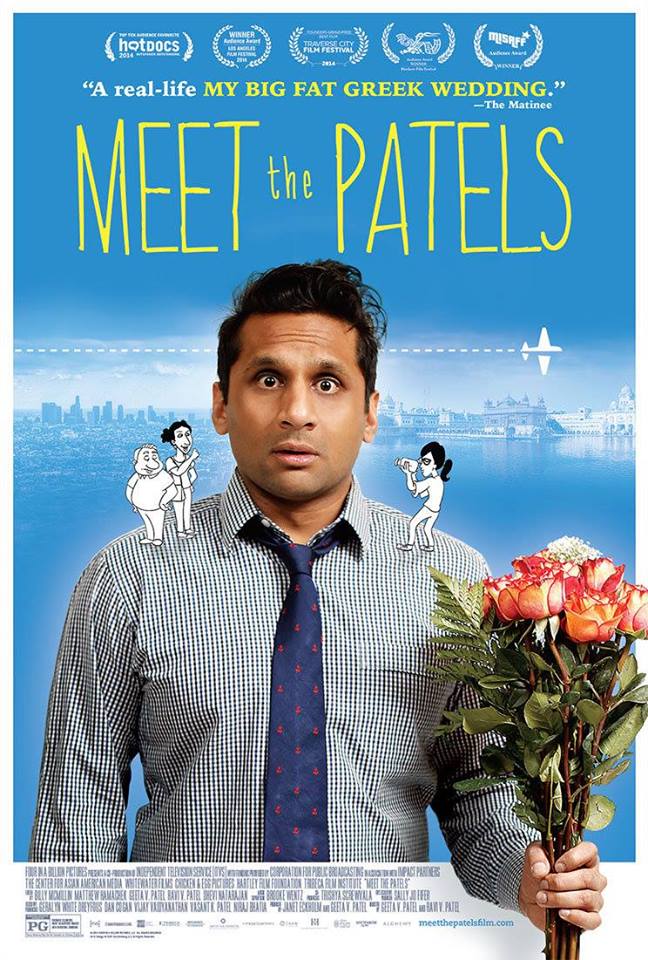 As a reliable resource for Independent and Emergent filmmakers in Colorado, the Boulder Filmmaking Incubator provides an environment where people from all disciplines of filmmaking can meet to share experiences, problem solve, bounce around ideas, and cooperate to make their films a reality. Our members find that the opportunity to network and collaborate can be invaluable in helping a project reach its highest level of quality.

Working on your own projects? You can screen your work at our monthly meetings. Want to work on a project? Network with other filmmakers to get on board. Or, join in one of the Incubator’s Fast ‘n Fun group projects. To see some of our past Fast ‘n Fun film projects visit www.FilmmakingIncubator.com.

Do you have questions about the future of BIG budget filmmaking in Colorado?

Do you wonder about how to raise millions of dollars to make your feature film?

Do you want answers? We got ’em!

Don’t miss this month’s meeting! So, mark your calendars! Founder and award-winning producer/director Marianne Leviton is happy to host the event. If you’re coming, bring clips, shorts, or trailers to screen for the group!

**NOTE – You must register via the BDA Event Page to be registered for this event (click here):http://boulderdigitalarts.com/training/details.php?offering=295&source=film 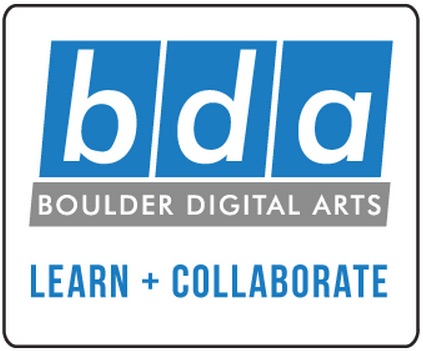 Please join ACamera and MPS Denver, 35 Left Studios and Barbizon for an Open House at the newly formed Rocky Mountain Studio Complex to meet the companies at the facility that form a real one-stop shop for all your rental needs.

We will be providing mouthwatering BBQ from our friends Steve & Amy at Appetites Catering. They always make great food! There will also be drinks for you to enjoy!

The Rocky Mountain Studio Complex is located 15 minutes from DIA airport and 15 minutes from downtown Denver. Not only are we a one-stop shop, but we are conveniently located off I-70 (which leads straight to the mountains) and we are close to I-25 (that runs north and south through the middle of Colorado), making it fast and easy to get what you need for your next project all in one location.

The Best Free Cinematic Event of Your LIFETIME

Forging the West, a new film by HaveyPro Cinema in association with Historic Pueblo, Inc., will bring the epic story of an essential western industry to life for audiences throughout the state and region. The Colorado Fuel and Iron Company (CF&I) began production in 1872 and grew to become the largest steel mill in the western United States and a firm of enormous importance to the industrialization of the American West. The first steel mill west of the Mississippi River, CF&I also played a pivotal role in the tumultuous history of American labor relations. Its mills in Pueblo, Colorado provided iron and steel products for agriculture, transportation, mining and other industries critical to western development.

Premiere events in Pueblo on November 11th and in Denver on November 15th. For tickets and more information, visit www.forgingthewestfilm.com

The future of business is being written by companies and products that – intentionally or not – shake billion dollar industries. In Design Disruptors, enter the world of 15+ industry-toppling companies – valued at more than $1 trillion dollars combined – with one unifying secret advantage: the transformative power of design. Design Disruptors reveals a never-before-seen perspective on the design approaches of these companies and how they are overtaking billion dollar industries through design.

Registration for this event is FREE!

GoPro is hosting a FREE local meetup at Boulder Digital Arts for content creators and editors. This meetup will promote one of GoPro’s latest and most exciting programs: GoPro Awards. It will include an informational session about GoPro’s freelance editor network. You’ll hear an overview, learn more about the perks, and get a chance to ask questions.

Space is limited, so reserve your spot today!

We welcome all content creators who are interested in submitting to GoPro Awards and getting paid for their incredible content. We also want to speak with advanced editors who are stoked on GoPro products, are interested in editing GoPro content, and want to continue to improve their skillset by becoming a part of GoPro’s freelance editing network.

Join us for an informal demo/training with this new cinema camera from Panasonic. The VariCam

camera, but in a much smaller package, weighing less than 6.2 lbs (body only). Having the same

sensor as the larger flagship model, the VariCam LT boasts the same dual native ISO settings of 800 and 5000 and offers the same 14+ stops of dynamic range. The LT comes equipped with an EF lens mount for use with lower cost, light weight lenses. A PL replacement mount is offered as an accessory

for use with more traditional cinema style lenses. 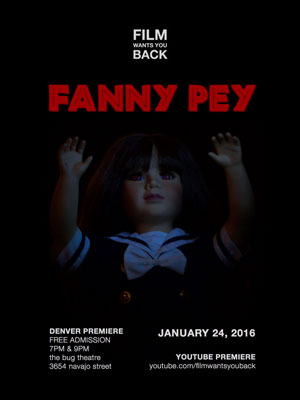 Joey will be doing a talk about his work as an adventure filmmaker working with companies around the world.

This is as much a presentation as a networking event, we will be opening up the floor for anyone to show their own work as a filmmaker, student, etc.

Link to his work: https://vimeo.com/joeyschusler

Feel free to shoot me an email if you have any questions!

Hope to see you all there! 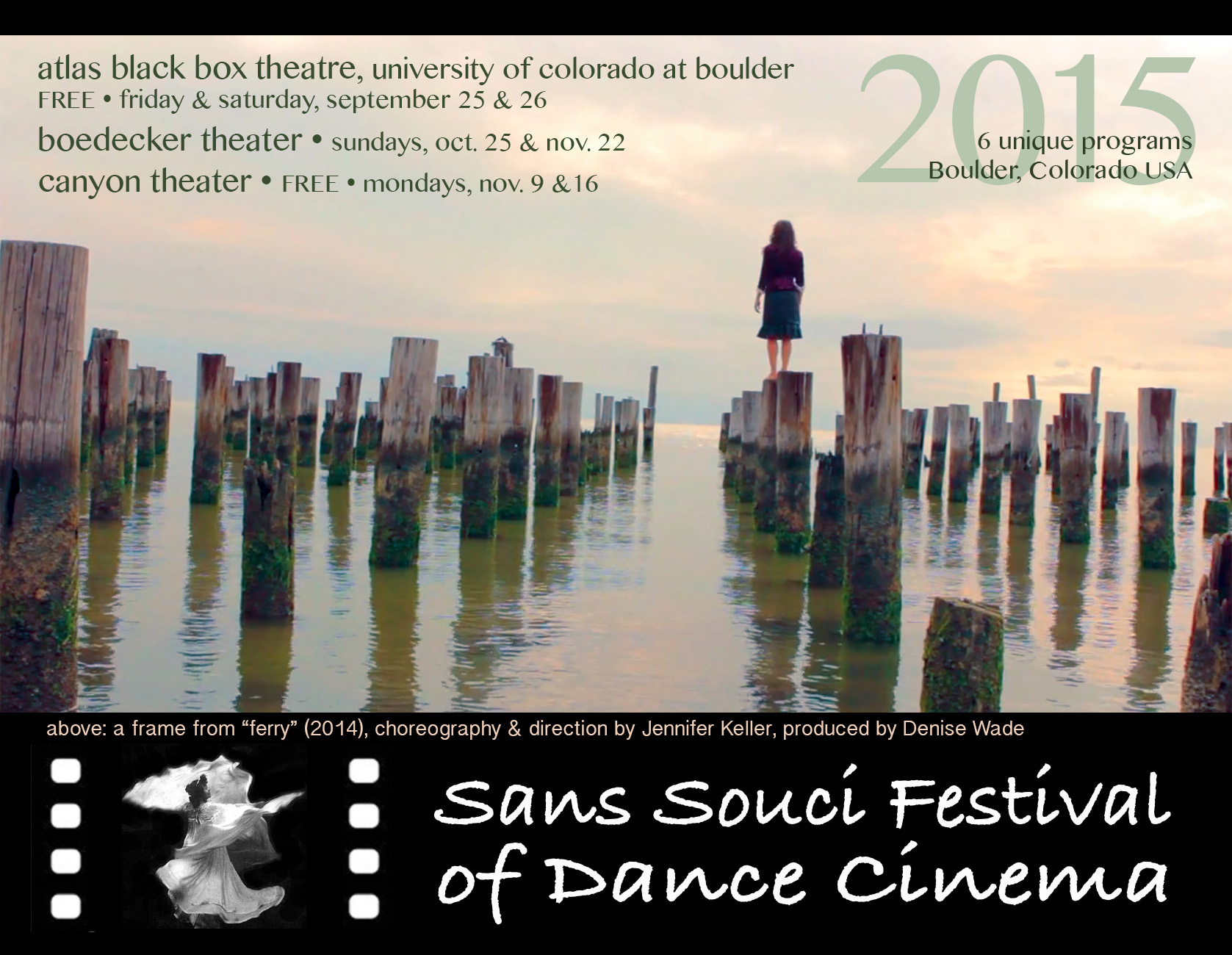 We want to meet you! Last year, we moved our production company K23 Films, to Boulder and are currently expanding our bandwidth. We believe in the talents in our community and want to create more opportunities to make waves of awesomeness together. In an effort to get the snowball rolling, we are having a party! Please bring yourself, friends, loved ones, and your pet parrots to:

The event will be on August 27th from 7-9pm. There will be music, drinks, and nosh. We will also be screening our work, and invite you to submit your own pieces. If interested, contact us at info@k23films.com. Looking forward to meeting you.

Check Out ‘Upon This Rock Films’ New Full Length Feature Christian Film ‘STILL PITCHING’ Now In Pre-Production And How You Can Contribute: 1 – Read all about ‘STILL PITCHING’, the author Bill Rogan, The Fish himself, and Upon This Rock Films (Projects page) 2 – UTRF has filled many Crew positions already however, we still need many more to fill (Positions page) 3 – Check out the awesome film folk and local radio/personalities who will take time out of their busy schedules, support at some level, and help UTRF with our current new full feature Christian film ‘STILL PITCHING’ (Film Folk page) 4 – UTRF needs prayer-warrior prayer; lots of it, along with $250,000.00 in funding to make this awesome God breathed film ($upport Us page) 5 – Go to http://www.uponthisrockfilms.com where you will have access to all the pages mentioned above (Projects, Positions, Film Folk, $upport Us) 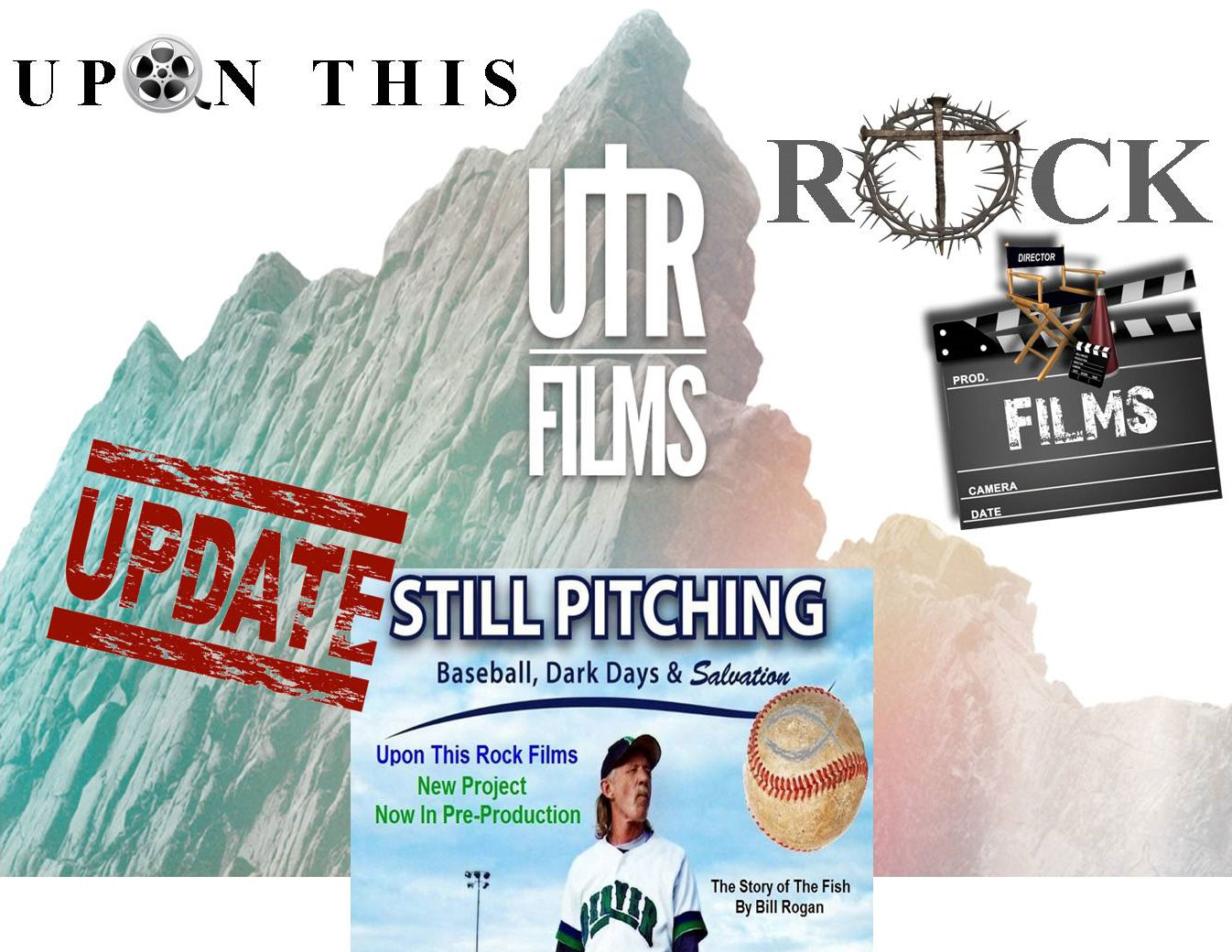