THE HATEFUL EIGHT – Reviews Are In

“The Hateful Eight” is shot on wide screen 70 mm Panavision, which critics and moviegoers agree is visually incredible. You can only find this special version at select movie theaters. The film runs 187 minutes long with a ten-minute intermission. Although some critics have found this to be too long and in need of editing, others still appreciate Tarantino’s gift for storytelling.

Kurt Russell stars as a bounty hunter nicknamed “The Hangman” who is transporting Daisy Domergue, played by Jennifer Jason Leigh, to Red Rock, where she will be hanged for her crimes. Along his journey he picks up Major Marguis Warren, played by Samuel Jackson, who is also a bounty hunter. Yet as a blizzard approaches, the group is forced to seek refuge at a small juncture where they soon encounter the other members of “The Hateful Eight”, two of which are played by Tarantino favorites Tim Roth and Michael Madsen.

Reviewers respect the film for various reasons. A.O. Scott of the New York Times says, “The Hateful Eight” is- what’s the term I’m looking for? A Quentin Tarantino film.” He delights in how it incorporates a “cast of familiar faces” and builds on a “fantasy world of film genres.” In this case, Tarantino tries his hand at the spaghetti western, of which he’s been known to be a long time fan. Richard Roeper of the Chicago Sun Times says “The Hateful Eight” is one of the best movies of 2015 and that it’s an “exhilarating movie going experience, filled with wickedly dark humor, nomination-worthy performances, and a jigsaw plot that keeps us guessing until the bloody, brilliant end.” The majority of critics seem to agree that the film’s performances are outstanding.

In the end, “The Hateful Eight” provides viewers with many reasons to see it on the big screen. And if the reasons above aren’t quite enough, perhaps it is worth seeing only because you take pride in knowing that those “glorious, snow capped visuals” (Stephanie Zacharek, Time Magazine) in the film were shot here, in our very own Colorado. 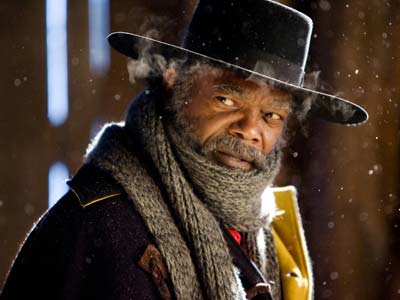